From Social service to a management  class, the journey can most candidly be put together by Muhammed Ali’s saying, “The service that you do to others is the rent you pay for your room here on earth.” With such a motto in mind, the EPGP batch 2018 formed it’s Prayaas Team with seven members. 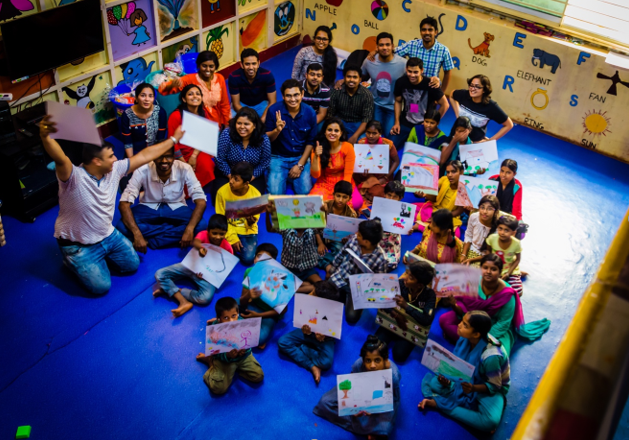 To continue the efforts by the previous batches, we decided to reestablish the link with the Desire Society. It’s a nonprofit volunteer organization that aims to care for the HIV+ children in India. The organization functions with an objective of health development and well-being of children living with HIV-AIDS through the institutional Care homes in various locations in India.

On 20th May 2018, Prayaas members with several volunteers decided to visit the Desire Society. We set out at 9:30 am in the morning and reached the Desire Society at around 10:00 am. We met around 15 kids with ages ranging from 8-18 years. They wished us ‘Good Morning’ in unison and the morning seemed even more meaningful. They were surprisingly disciplined, and all of them sat down eagerly looking at us. Suhas took the lead to introduce us in Kannada and showed them an audio-visual on the environment. Soon the kids were engrossed in the video and Dinesh, and Arindam didn’t miss a single chance to capture the moments in their lenses.

“The way the kids’ faces lit up when we told them about the environment. It was a sight to watch. They seemed so excited and willing to learn” recollected Adhara later while we were returning back.

We had decided to try something creative and planned to organize a painting competition. After the audiovisual Suhas instructed the kids to draw on the topic: ‘Environment.’

Few serious kids immediately started drawing trees, rivers, and streams but there were many who chose to draw anything they liked. It reminded me of my childhood days. It always entices the kids to follow their hearts and not limit their creativity. I remember I enjoyed doing things which were out of the school syllabus. I sat with Nisha, who was more interested in drawing the impression of Mowgli given on the crayon box. There was another guy named Suresh. He was keen to draw himself and wrote “stylish Suresh” beneath his sketch. While Anushka and Ravi mentored a bunch of serious kids, who were keen on bringing out their best, Anu was overjoyed seeing the innocence of the kids.

Finally, the time was up, and we got some amazing colorful stuff from the kids. It was amazing to see that the children packed their crayon boxes and put all their drawing materials aside after the painting competition. Most of the kids were orphans, but still, they have learned the values of organizing themselves.

Next, we decided to play with them. Soon they came up with football, cricket bat, and ball and badminton racquets. They were agile and passionate about their games. Vineet, Karthik, and Maulik had a tough time tackling the ball with Suresh, and that made Suresh lift his hands up and say, “Hey, I am Sunil Chhetri.” We were simply astonished. The captain of the Indian Football team is promoting football in India via social media, and there are innumerable Indians who don’t know Sunil Chhetri. But Suresh just loved to be associated with Chhetri.

At the end of the day, we presented health drinks and fruits for the children and promised continued support to the Desire Society. Sunday could not have been spent in any better way. It was a real break from our rigorous academics. My eyes became teary when one of the kids asked me before leaving, “You will come back soon right?” It is such a fantastic feeling to have got connected with the kids almost instantaneously and have memories for life.

Anubhav summarized the visit as “A day at Desire society was a lesson about life for me. Interaction with the children has given me an entirely different lens to look at the challenges, and I have evolved as a much confident person”.

This article is by Soumya Roy

The captivating pictures are the work of Arindam Bakshi and G Dinesh Babu.