The day for the outbound learning program had come. We bundled up into camper vans (and a big bus) with some trepidation, under a hot sun, taking stock of the batch of 72 and cold water bottles. That done, with the folks settled in, we slowly trundled out of the serene IIM campus. Pretty soon we were out on the streets of Bangalore, headed towards Dodaballapur, destination Pegasus. The early evening traffic ensured that we were transported to our childhood memories of picnics and school field trips faster than we were to the outskirts of the city. Somewhere along the way, the scales formed on some of us, by years of living for others, started to fall away. Grown ups in those buses that day could have give ten year olds a run for their money.

It was dark when we finally reached Pegasus. Off the beaten track would have been an apt description, but for one problem. There was no track at all in the last mile! One of the buses even got stuck, giving some of the fortunate ones an early taste of what was in store for us.
We were shown to our tented accommodations by ‘the Murthy’ and after quick showers in basic , but comfortable amenities, we made our way to the first briefing. After outlining the dos and don’t s, the instructor mentioned that this place is referred to as the ‘military camp’ by the locals. This started ringing bells that I hadn’t heard in quite some time. Post the briefing and the dinner, people broke out to relax. The rest is, of course, classified. As they say, what happens at Pegasus stays at Pegasus.

The next morning started with a scrumptious breakfast, after which we were broken into smaller groups. It wasn’t long before, finding resonance with ancient Rome; the instructor said, “Let the games begin”. Gauging how to move people through nets without touching the strings or crossing a field using barrels and planks, the activities all seemed designed to push certain aspects of personal traits and group dynamics to the forefront. Though some of the tasks questioned the efficacy of the age old advice of keeping one’s feet firmly on the ground, and involved substantial labour under a hot, unrelenting sun, I must admit that it was a lot of fun. The day continued after lunch as well and we got a series of other tasks that, along with the dexterity of the mind, called upon physical agility in climbing over hurdles and jumping across cantilevers. Apart from identifying those would do well as cat burglars, we were forced to step back and reflect if our capability to achieve something was restricted by our own view of ourselves. With the setting sun, our task-weary lot made their way back towards the quarters.

One observation that many people had was that while we worked together seamlessly as teams, delivering on tasks , not everybody shared the same ideas of relaxation and fun. This, in some ways, also highlighted the diversity in the batch. Whether it be the exciting discussions anchored as a joint effort under a moonlit sky, or the spinning of bottles to play truth or dare, the fact remained that it had been quite some time since we last indulged in making new friends at this scale.
The last day was spent doing some business as usual stuff like describing shapes while being blindfolded, rappelling down vertical rock faces, and moving huge A-frames across the surface of the moon. Though the instructors tried to put us into classrooms for some gyaan, the real lessons were always out there, heard in the shouts of triumph, whines of despair, hoots of motivation or when someone just simply stretched out a hand to pull you across.               The Journey has indeed STARTED! 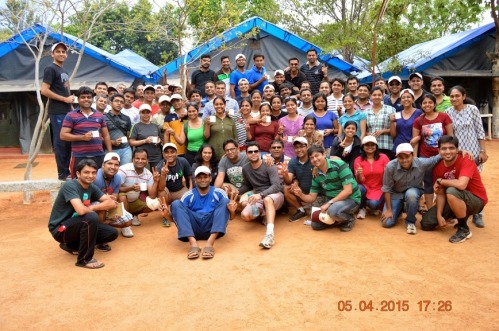